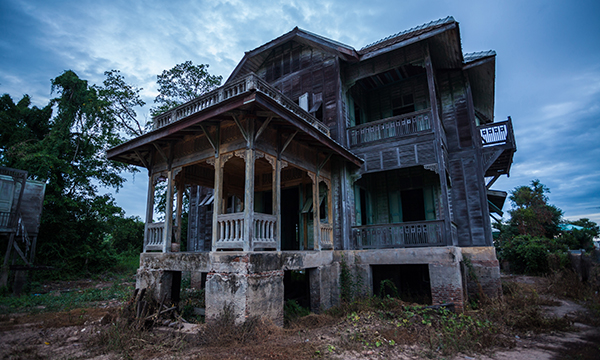 The 13 Most Haunted Houses in the U.S.

From the East to the West, there are more haunted houses in the U.S. than you may think. We found the spookiest of spooky, so keep reading for stories of witches, ax murderers, secret passages and more. If you need some inspiration on how to decorate your home for Halloween, it may be helpful to pull some ideas from these 13 haunted mansions. Which one would you risk a visit to? 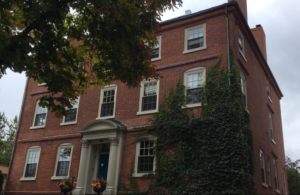 It only makes sense to start in Salem, Massachusetts. A major figure in the Salem Witch Trials, Sheriff George Corwin, lived and died at the exact site that the Joshua Ward House rests upon. The brick mansion was built in 1784, about 87 years after Corwin was buried there. The Sheriff was known as “The Strangler” because of the 19 men and women he executed for witchcraft under his watch. Nowadays, visitors claim they have been “choked” by Corwin’s ghost. Some also believe they have spotted one of his victims whose ghost was captured by a realtor taking photos of the property. See the photo for yourself here. 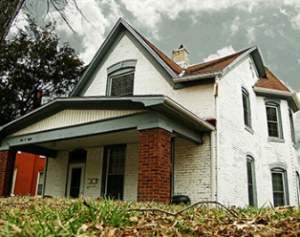 The Sallie House is claimed as one of the most disturbingly haunted houses in America. It all started with a little girl who was the victim of a botched appendectomy during a house call in the early 1900s. Then in the 90s, the family living in the house decided to document their experience on the TV show Sightings. On the show, there were flying objects, frequent apparitions, gouging, shoving and scratching. All this was mainly directed at the male homeowner. The house is currently vacant, but still a popular hub for paranormal researchers. 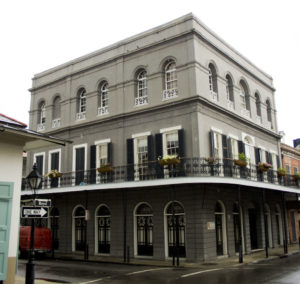 The most surprising fact about this house in the French Quarter of New Orleans may be that famous actor Nicolas Cage once owned it. And if it looks familiar to you, then it may be because American Horror Story: Coven was based on the real-life socialite and serial killer Madame Delphine LaLaurie. She orchestrated a torture chamber for slaves at the Royal Street Mansion from 1831 to 1834. The victims are said to haunt the property with moans, shouts and weeping. Visitors also say they have seen faces in the upstairs windows. Today, a wealthy oil tycoon owns the deed to the house. 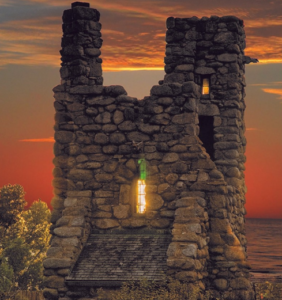 At first glance, this haunted house and its neighboring stone tower overlooking the Central Coast of Carmel are seemingly beautiful. The Tor House was built in 1919 for the poet Robert Jeffers and his family. In his poem Ghost, Jeffers predicted that he would haunt the home long after he passed. In 2012, the cottage was featured on the TV show Ghost Adventures, in which ghost hunters found all the evidence they needed. Their devices picked up paranormal activity and they watched a drop of ink on paper transform into a small devil figure. You can find the short clip on the Travel Channel here. 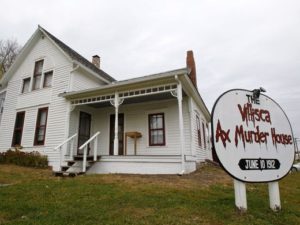 If you want to do more than just tour a haunted house, then you can stay at the Villisca Ax Murder House for around $400 a night. What makes it haunted, you ask? In 1912, Josiah and Sarah Moore, their four children and two guests were bludgeoned to death on June 10th. Even now, the crime remains an unsolved mystery, with much of the home still intact. However, there is no running water or electricity, and in 2014, a paranormal investigator who booked a room ended up stabbing himself by morning. In other words, stay the night at your own risk. 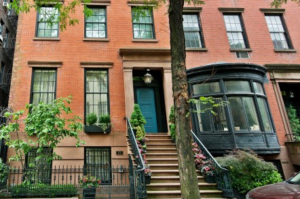 According to legend, the city that never sleeps includes a reported total of 22 ghosts residing inside the famous brownstone off Fifth Avenue. The House of Death hosted a range of people over the years, from Mark Twain in 1900 to a six-year-old girl beaten to death by her father in 1987. Of course, people have claimed to have seen the ghosts of both. Additionally, passersby have claimed to have seen the apparitions of a lady in white and a gray cat. 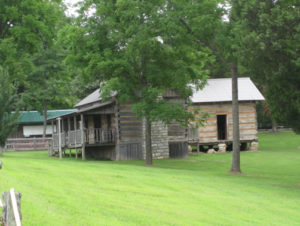 The haunting of the Bell Witch is one of the most famous supernatural stories in American history, even garnering the attention of Andrew Jackson. He was quoted saying, “I had rather face the entire British Army than to spend another night with the Bell Witch” after one night at the Bell farm. The story begins with a war between neighbors Kate Batts and John Bell. Batts believed that Bell had cheated her out of some land and vowed to haunt him forever as she lay on her deathbed. The Bell family experienced physical attacks and heard noises in the walls. They also spotted strange-looking animals, including a dog with the head of a rabbit. Visit during the Bell Witch Fest to see for yourself. 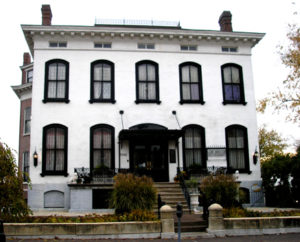 Listed by the Travel Channel as one of the most terrifyingly real haunted houses in America, this 33-room Victorian mansion is a must-see in St. Louis. Well, if you’re into the type of thing. The family who lived in the mansion owned Lemp Brewing Company, a popular local brewery before the Prohibition hit. Between 1904 and 1949, four members of the Lemp family committed suicide, three of them inside the mansion. Now a converted restaurant and inn, the ghosts of the family are said to reside inside and haunt the guests. 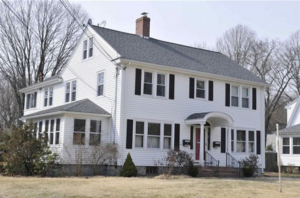 If you’re a scary movie buff, then you’ve probably heard of, if not seen, The Haunting in Connecticut. It came out in 2009 and was based on the real story of the Snedeker family who lived in the house. Oh yeah, it just so happened to be a former funeral home. Both Snedeker parents claimed to have been physically attacked and sodomized by spirits during their two-year span of living there. Their son Phillip also claimed to be visited by a creepy man with long black hair. A new family lives in the home now, so you can’t actually visit, but the movie should be enough to run chills down your spine. 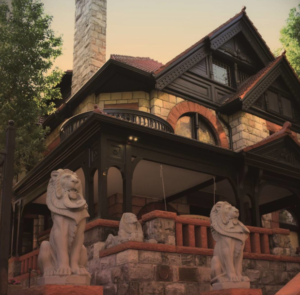 The “Unsinkable Molly Brown” was one of the only survivors of the Titanic and spent most of her life in this prized Victorian home located in Denver. Her real name was Margaret Tobin Brown and she became a well-renowned advocate for the rights of both coal miners and women in the U.S. She passed away in New York in 1932 and the house is now a museum with artifacts from Brown’s life. Visitors claim to smell her husband’s pipe smoke, see spirits roaming the dining room and have the furniture rearranged. 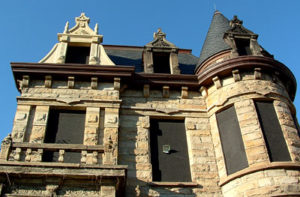 Known as the most haunted house in Ohio, this Victorian home located in Cleveland has always been shrouded in mystery. Locals whisper about the original owner, Hannes Tiedemann, who lived there in the 1890s with his mother, wife and three children. His mother, wife and daughter all died of various diseases within a span of four years, sparking rumors that Tiedemann was actually to blame. It was also rumored that he hanged his mentally ill niece and killed his mistress and illegitimate daughter in the home”s secret passageways. After Tiedemann”s death, the house has been sold many times. Some inhabitants claim to have seen a little girl haunting the third floor, a ghostly white figure looming on the stairway and a woman in black on the top floor. 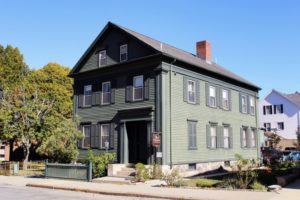 This haunted house attracts visitors from around the world to see the exact spot where Lizzie Borden axed her father and stepmother in 1892. According to visitors, Borden is still laughing about the murder, too. Cackling can be heard at the top of the stairs late at night, where the tragedy took place. Sightings of the ghosts of her parents stalking the grounds have also been reported. Plan a tour at the museum and book a stay at this B&B at your own risk. 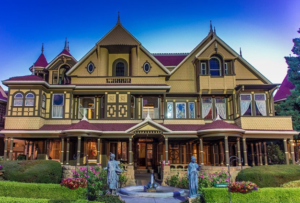 Sarah Winchester’s husband designed the “gun that won the west,” also known as the Winchester rifle. Shortly after her husband and daughter’s death, Winchester consulted a spiritualist who alleged that she was being haunted by the spirits of the Native Americans and Civil War soldiers killed by her husband’s creation. She then moved west and used her $20 million inheritance to build a house to confuse the ghosts. There are 160 rooms, doors that lead to nowhere and a staircase leading to the ceiling. It’s definitely one of the most confusing haunted houses around.

You may be feeling a little spooked by now, especially if you’re reading this at home tonight. Was that just your house creaking or something more? Luckily, our insurance partners don’t calculate Homeowners Insurance rates based on how haunted your home is. However, our Insurance Specialists can help you find the best combination of price and coverage. We can’t protect your home from spirits, but we can help you protect it in other ways. Give us a call at (855) 247-5298 for a free quote.

The information in this article is obtained from various sources. This content is offered for educational purposes only. No warranty or appropriateness for a specific purpose is expressed or implied.