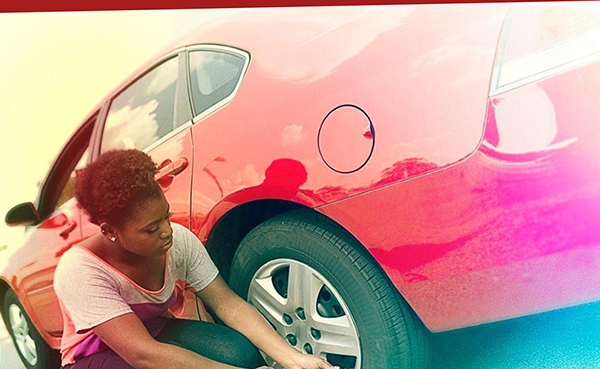 Worn Tires: How to Ensure that Your Ride Is Safe

Everyone knows that worn tires are dangerous, but the truth is that tires can lose their grip well before they are worn out. Consumer Reports has done numerous tests that show that the tread on tires loses a significant amount of footing at the midway point. Yes, tires are expensive, but they are a small investment to make when you think about the risks involved in driving with unsafe tires.

According to the National Highway Traffic Safety Administration, nearly half of the 11,500 vehicles the agency checked had half-worn thread on one or more tires. Ten percent fared even worse, with at least one bald tire.

Worn and bald tires are often the cause of accidents. Find out when you need to buy new tires:

Driving in the rain or on a slick road with worn or bald tires can be deadly, and that’s not an understatement. If your tires don’t have deep grooves that can let the water out from beneath the tread, your car will hydroplane.

Hydroplaning is when the tread skims the water’s surface and your car cannot take direction from steering the wheel. It’s very much like skidding, only your vehicle can easily veer into another lane or spin out of control very while this is happening. During hydroplaning you have absolutely no control.

Prevent hydroplaning by having good tires and driving slower as soon as it rains. In fact, the road

s are slicker, especially over oil spills, when it first rains.

Braking can be even more dangerous than hydroplaning during wet weather if your tires are worn. You may think you’re braking in time, but because of the low tread you may come to a full stop several feet later. Worse yet, your car may spin out if you brake hard and fast with bald tires during rain. You can imagine how sliding on bald tires can be a disaster in the snow.

How Do I Know How Worn My Tires Are?

A new tire has grooves that are about 10/32 (roughly 1/3) of an inch deep. Tires are considered bald when any of the grooves are 2/32 of an inch beneath. There are a series of horizontal bars at the base of the tire’s grooves that help you spot a bald tire. If your tires are in fact bald, the bars line up with the surrounding tread. When a tire reaches that point, it would fail a state safety inspection.

Also, try the trusted penny test. It accurately tells you if you have 2/32 inch tread or better on your tires. You may be surprised that you need to go tire shopping sooner than you thought, especially before 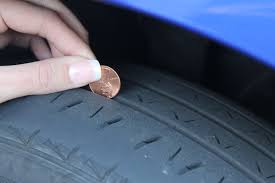 If your tires aren’t worn evenly, you may want to use a tread-depth gauge to check the grooves on all tires. Tread-depth gauges cost about $5 and are sold at most auto-parts stores.

When Should You Buy New Tires?

It’s never a good idea to wait until your tires reach 2/32 of an inch grooves because, during rain or snow, they will have insufficient tread to transport you safely.

Depending on the manufacturer, new tires have anywhere between 25,000 and 40,000 miles before they reach the halfway point, after which they pose a danger on wet or frozen roads.

Some people think that because some racing cars run on treadless tires, they too can have complete control over their tires after they lose tread, but you cannot compare a car racing scenario with a day-to-day commute or having to drive in various weather conditions. Be wise: Always drive with tires with adequate tread.

Even with the best tires, accidents happen. You need to be protected if that day comes. While you want to save as much as possible on your premium, buying insurance from a less-than-reputable insurer will end up being more costly if you end up needing to file a claim. Contact a knowledgeable Insurance Specialist (888) 772-4247 for multiple low car insurance quotes from top carriers in just one call. Or, just click here.