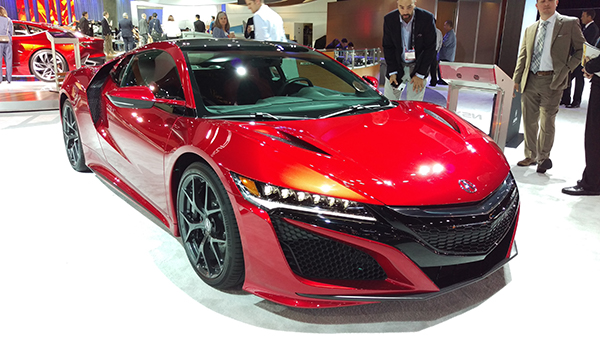 The L.A. Auto Show: A Glimpse into the Future

The L.A. Auto Show is one of the worldâ€™s most influential and anticipated auto shows. Hundreds of thousands of people attend every year and the event includes new car reveals, test drives and the latest in technology and design. In short, itâ€™s something like a glimpse into the future for car enthusiasts, industry people and car buyers.

This year, the L.A. Show was aptly called the AutoMobility LA conference and it was a true testament to technology. While style and design have and always will be a major draw for car buyers, this year, manufacturers showcased new innovations that mirror our current technological revolution. The new technology on many vehicles bridges the gap between smartphones and cars. And just like their plug-in cousins, cars are quickly going electric.

A backup camera in the Tesla Model S

In general, the trend of this yearâ€™s show was that there were many more highly internet-connected vehicles than ever before. Not surprisingly, there were a handful of cyber security companies in attendance too, to explain how they protect networked cars from getting hacked, which is one risk of owning a technologically savvy car.

In line with the smartphone-ish cars, there were countless digitally advanced vehicles that boast the ability to use services like Apple CarPlay for a hands-free driving experience when using smartphones while behind the wheel. Hyundai has even partnered with Amazon to sell apps that can start, heat and even cool cars remotely.

Lately, everyone is talking about self-driving cars, and while there were no fully autonomous cars at the 2016 LA Auto Show, there were glimpses into a near future when we will see them. While cars canâ€™t yet drive themselves, the industry has made vehicles safer while refining the technology necessary to make self-driving vehicles possible one day.

This year, many vehicles featured more advanced sensors but also backup cameras, which will be mandatory on all new cars starting 2018.Â  These are all big steps towards a future of self-driving cars, which will utilize multiple cameras and sensors, along with highly sophisticated software, to navigate safely without a driver. Even Porsche, which has built its identity on the joys of the driving experience, plans to feature more autonomous technology in the coming years.

While weâ€™re already used to seeing electric cars on the road, the L.A Auto Show revealed a growing demand for this relatively new technology. Even though less than 1% of American households actually own an electric vehicle, there were six new models introduced at the car show this year. These plug-in vehicles came in several price points, ranging from economy to luxury.

One electric model that is sure to be a hit with young drivers is the eGolf from Volkswagen. Jaguar unveiled its I-Pace all-electric S.U.V which will be available in 2018. Youâ€™ll also soon see these electric cars on the road in 2017 and beyond: The Mitsubishi eX Concept, the Mini Copper Countryman S E ALL4, the Hyundai Ioniq Electric, the Cadillac CT6 PHEV and the Chrysler Pacifica Hybrid.

Even Porsche says it will look to make an electric vehicle in the future. Oliver Blume, Porscheâ€™s chief executive, told the Los Angeles Times, â€œWe think electrification is a technology of the future, and we have a responsibility to the environment.â€ By 2026, itâ€™s estimated that as many as 25% of all cars will be plug-in electric vehicles.

New technology is always expensive, especially when itâ€™s first unveiled, so buyers should know to expect a big hike in sticker prices. For instance, the Chrysler Pacifica Hybrid has a $43,000 starting price, which is a big jump from its base conventional model priced at $29,590. Electrification doesnâ€™t come cheap!

While electric cars donâ€™t really affect peopleâ€™s car insurance rates one way or another, some of the new safety features in some new models will. Insurance discounts often apply for hands-free driving capabilities, and the added sensors and mirrors will likely bring down rates for drivers who buy these cars.

People who want to purchase vehicles they can network on the Internet will definitely pay a higher sticker price to have the convenience of Internet connectivity, which may be a red flag for insurance carriers worried about hacking and theft. These car owners will probably need to safeguard their investment by purchasing cyber security apps and services to offset the risk which may raise premiums. To find out more about how one of these new cars will affect your insurance rates call (888) 772-4247or click here.