April Fool’s Day 2014 has now come and gone. Hopefully, you emerged from this “prankful” holiday relatively unscathed. But some people in the Bay Area who thought they had dodged the proverbial bullet were stunned when they walked outside on the Monday morning after April Fool’s Day to find themselves victimized by the latest prank that has invaded the U.S.

It’s just like it sounds: an unknown number of people using nothing but their bare hands to lift one side of a Smart Car up off the ground and push it over onto its side or roof. Four residents of the Portola and Bernal Heights areas of San Francisco discovered their Smart Cars tipped over between the hours of 1am and 9am on April 7. No one knows precisely what prompted these incidents or whether they were completely random.

Actually, this prank isn’t new. Its roots can be traced back to Europe, where smaller vehicles have been zipping around streets for decades. The first actual Smart Car wasn’t released until 1998, and the first reported instance of one of these vehicles being tipped over was from Canada back in 2005. The actual trend took off in 2009 in the Netherlands, where numerous Smart Cars were tipped over low guardrails and dumped into Amsterdam canals. Another one of these vehicles was caught on camera being tipped over during the riots that followed Vancouver’s loss in the Stanley Cup Finals in 2011. There was even a satirical Facebook page called Smart Car Tipping that was live for a while. 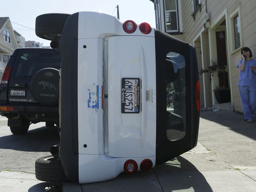 For some, these incidents might elicit a chuckle or two. But it’s definitely not a laughing matter for the owners of these vehicles. Tipping Smart Cars often causes windows to crack or shatter, taillights or headlights to break, and dents to form on the side that was tipped over. In addition to the costs of these repairs, the owners probably have to have the entire vehicle checked to see if there are any leaked fluids or structural damage.

There aren’t any hard-and-fast guidelines in place to prevent your Smart Car from being tipped over. However, there are a few tips to minimize the chances of it happening to you:

Of course, the best defense against damages sustained from Smart Car tipping is to invest in a comprehensive insurance policy, which covers all non-crash related mishaps including vandalism, theft, and weather damage. Auto Insurance Specialists can help you find suitable comprehensive coverage at an affordable price, just like they’ve been doing for Californians for 45 years. So if you’re looking to upgrade your auto insurance, call AIS toll-free at 888-772-4247 or visit the AIS website today.