↓ Skip to Main Content
Home › Homeowners Insurance › Condo Insurance › Holiday Cooking Stress: How Do I Put Out a Kitchen Fire?

Holiday Cooking Stress: How Do I Put Out a Kitchen Fire? 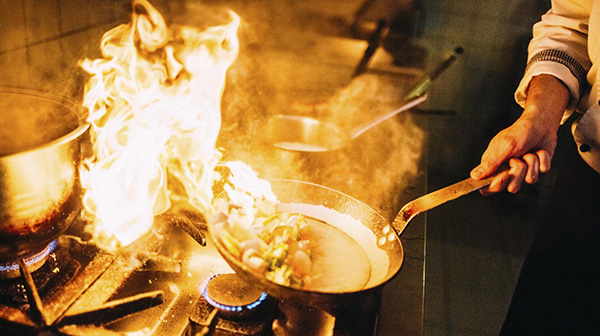 The question really should be, “How do I prevent a kitchen fire?” It’s much easier and less costly to maintain a clean and safe kitchen than it is to replace burnt out appliances or, worse yet, have your home burn down due to negligence. During the holidays especially, there are a large number of house fires, which start in the kitchen. Even new cooks are trying their hand at cooking lavish turkey and ham dinners during this time. Those of us who have been cooking for years also can experience a kitchen fire, especially if someone was less than careful cleaning out an oven or stovetop before we started.

Below, we share some useful kitchen-fire prevention tips and also guide you in controlling a fire before it engulfs your kitchen and possibly your entire home.

Don’t Throw Water on the Pan! 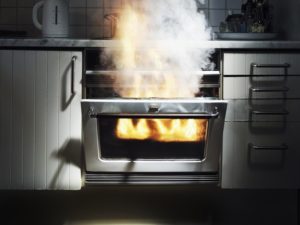 Water poured over a grease fire will cause a fireball. As you may know, fireballs travel and catch elsewhere, so make sure not to try to douse a flame with water. You really only do that when putting out a campfire. However, in most kitchen fires, water will only make the fire more combustible. As soon as the water hits the pan and heats up, it will erupt and engulf your kitchen in mini fires that may grow out of control.

Ovens Catch on Fire, Too

If your oven is dirty before you start cooking, it’s a fire hazard. Dried particles of food and grease drippings and bits of batter can easily go up in flames. If you’re cooking a ham or turkey, make sure you have the drippings under control, preferably using a tray beneath the food in case it bubbles over or spills when you baste. Even self-cleaning ovens have gone up in flames so don’t think that your oven is not vulnerable just because it has this function.

Forgetting you have food in the oven happens more often than you’d think too. So do oven fires. Don’t leave a running oven and go out to buy other ingredients. Never leave cooking food unattended, not even when it’s in the oven. Even if you’re lucky to avoid a full fire, the smoke damage could be very costly. The same goes for cooking with any appliance: the stovetop, a microwave, the toaster oven and whatever other gadgets you own.

These types of fires are more dangerous than oven fires which can be contained by closing the door. All it takes is one fireball or embers to catch elsewhere from whatever you’re cooking on the stove for the entire kitchen to become engulfed in flames. It’s harder to starve the fire of oxygen when it happens on the stove.

How to Put Out the Flames 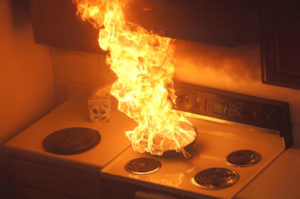 So far, we focused mainly on prevention because preventing a fire will save you the most money and headaches. However, cooking fires happen to the best of us, so let’s get down to the basics first. Turn off whatever appliance is on fire. If your oven is on fire, turn off both the stovetop and oven. Same thing if your stove is on fire. Turn both off unless you’re in danger of burning yourself. If you can’t safely put your hand near the stove, don’t do it. Get a fire extinguisher first.

If you can turn off the appliance, do so. Next, if you have a pot or pan on the stove that is in flames, throw a lid, a tray or another pot over it, anything to cut off the oxygen and kill the fire. If the fire is spreading, use your fire extinguisher. Again, only take these steps if you are not in harm’s way and if the fire has not spread. If at any point you feel you are in danger of catching fire, leave and call 911.

If you’re lucky enough to contain the fire, make sure everything is cool to the touch before you begin cleaning. And make it a point to always contain drips and to clean up after each use of the oven and stovetop/appliance.

Broilers, Toaster Ovens and Microwaves Can Catch Fire Too!

We often cook the greasiest food like bacon and steak in our broilers. Some people even use it as a toaster for bread. Believe it or not, broilers are a common fire starter because they are often not cleaned after use and because people leave food there unattended for just a couple of minutes to find it’s gone up in flames. The same goes for toaster ovens.

According to Bon Appetit, 33% of fires happen because we leave our cooking unattended. No, you can’t go pick up the kids while the sauce is simmering. Absolutely not!

Yes, microwaves can catch fire too. Again, it’s often old food that catches fire so keeping your microwave clean is very important. People also often cause a fire burning popcorn that they are trying to re-pop with an open container.

If you notice flames while the microwave is running. Turn it off and keep the door closed until the fire burns out. If it doesn’t eventually go out, use a fire extinguisher or call the fire department. Always aim at the base of a fire when using an extinguisher.