Electronic License Plates Are Coming Sooner Than You Think

Over the last few decades, there have been numerous technological and electronic advancements made in passenger vehicles. Drivers tend to focus on the innovative creature comforts, like in-dash GPS, satellite radio and hands-free mobile phone applications. Electronics also play a major part in the operation of today’s vehicles. There are engines compatible with computer diagnostic equipment, electronic crash sensors in bumpersÂ and technology that identifies stationary objects aheadÂ to apply brakes faster than drivers can. Given these advancements, it’s a bit puzzling as to why the electronics trend has avoided one of the most common components of a vehicle: license plates.

Out With The Old, In With The New

Dull, unsophisticated license plates are still manufactured and affixed to vehicle exteriors. They also require periodic manual changes by drivers when they receive new plates.Â Think about the fact thatÂ the first license plates, whose basic design hasn’t changed much, appeared on cars in New York during the same year that the first radio transmission was successfully received. However, that may soon be changing with the introduction of electronic license plates. And California may be the first state to issue them. It’s about time.

Lawmakers in the Golden State have approved a measure which permits the rollout of electronic license plates by 2017. The technology already exists to manufacture these innovative plates. It’s rumored that the California startup, Smart Plate Mobile, may be the company that begins supplying them to drivers.

What Are Electronic License Plates? 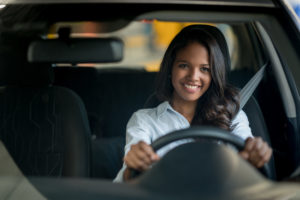 Electronic license plates aren’t made of metal. They’re actually made fromÂ a special “electronic paper” material that receives power through solar energy and automobile vibrations generated when a car is driven. These plates would also have the ability to be altered remotely by the California Department of Motor Vehicles or other agencies. This could allow drivers to have their tags or registration updated automatically upon sending a check or electronic payment to the DMV. How convenient would that be?

Furthermore, these plates could be changed to display certain messages. For example, if a driver’s Auto Insurance has expired, anÂ “uninsured” message could appear over the letters and numbers of the plate. The same action could be taken for driver’s with suspended licenses or for vehicles suspected in crimes.

Are There Downsides to Electronic License Plates?

Unsurprisingly, electronic license plates have caught the attention of privacy advocates. Many people are skeptical that the technology would be limited to certain functions and not used for other purposes. Also, there are concerns that human error or hackersÂ could cause the plates to malfunction and display inaccurate messages.

Will They Impact Car Insurance Rates?

Potential problems aside, it’s easy to see how electronic license plates could have a positive impact on Auto Insurance rates. Theoretically, the ability to identify uninsured drivers immediately would reduce the number of them on the roads. This could lead to lower Car Insurance costs for everyone. And if a vehicleÂ was stolen, these electronic plates could improve the auto theft recovery rates in California, which would also lower insurance premiums.

It’s easy to imagine electronic license plates becoming as standard as seat belts or airbags in California vehicles. If they do, hopefully Auto Insurance rates will drop so that they benefit everyÂ driver in the Golden State. If you want to lower your rate now, call (855) 919-4247 and speak with an Insurance Specialist today. We’ll find you discounts, bundle options and any other price breaks available.

The information in this article is obtained from various sources. This content is offered for educational purposes only and does not represent contractual agreements. The definitions, terms and coverages in a given policy may be different than those suggested here. No warranty or appropriateness for a specific purpose is expressed or implied.