↓ Skip to Main Content
Home › Cars and Auto Insurance › Can My Car Get Hacked? See If You’re at Risk For Car Hacking

Can My Car Get Hacked? See If You’re at Risk For Car Hacking 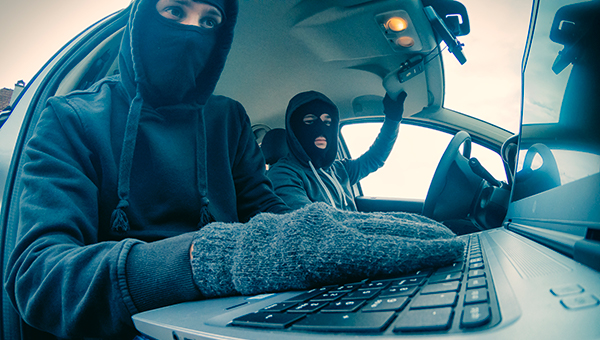 For years now, computers, phones and bank accounts have been commonly hacked into. The newest fear is the threat of car hacking. What all these types of cyber-attacks have in common is that technology is both the problem and the solution. When we want to make life easier and less chaotic, we plug in using a myriad of devices. We also use technology to keep us safer with the most advanced safety systems in our vehicles. With this advanced technology, you may be wondering if your car can get hacked.

The Anatomy of Car Hacking

Unfortunately, our already overwhelming lives really do include the possibility of car hacking. The more technologically advanced a car is, the higher the chances are of it being hacked into by a computer or even a smartphone. Self-driving or semi-autonomous vehicles are especially vulnerable to hackers because they are hyper-computerized. In fact, all new cars are vulnerable to hacking to some degree because most are already computerized, even if they’re not as high-tech as a Tesla. Another way hackers can gain access to a car is by phishing. Fake offers and pop-ups can easily download an app onto your phone that allows access into your car. Always be careful about what you tap if you have a pricey and computerized car.

What Do Car Makers Say About Hacking? 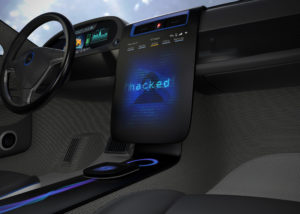 Auto manufacturers are only now realizing that they didn’t foresee the problem of car hacking. They intended to design their products with more safety not more risk. Many are now struggling to prevent future incidents of car hacking, a topic which garners quite a lot of negative and often-sensationalized attention.

In 2015, several car hacking demonstrations caught the attention of many Americans. What we learned was shocking. A car hacker can seize control of a computerized self-driving car and run the vehicle off the road or crash it into another vehicle, pedestrian or object. This prospect is, indeed, terrifying but also straight out of a James Bond film. How many of us have mortal enemies? Instead, the most realistic fear is, of course, theft.

Tech companies are starting up with the sole focus of preventing car hacking. A security firm, Trend Micro, published a report on how a hacker can easily turn off a vehicle’s safety mechanisms, including brakes and airbags. Now, cyber security software is in high demand. Without the software written by computer geniuses, drivers are prey to very skilled hackers who know how to go through many levels of standard security features built-in by the manufacturer.

Car makers are beginning to design vehicles with an awareness of hacking vulnerabilities. They’ve even been paying hackers to uncover new vulnerabilities in vehicle software, sometimes up to $1,500 per discovery! In fact, hackers have the hottest jobs in the auto industry right now and are in high demand. The Defense Advanced Research Projects Agency (DARPA) is just one organization that pays hackers to find security issues.

The Future of Car Hacking

The future of car hacking looks bleak for car owners. As problems with new technology arise (and arise they always also do initially), tech companies will step in and solve them before they turn into common disasters. There is no denying the fact that people will be more prone to car hacking as cars increasingly become connected to the internet. Entry is already a problem and people will continue to devise new ways of stealing cars. As for driving others off the road or causing all functions to become disabled—hackers will become more sophisticated, but so will vehicles. Manufacturers are learning how to prevent this issue.

Can My Car Get Hacked?

The fact is that the extreme examples of how a car can be hacked into are not very real threats to most cars on the road. For one thing, the hacker can’t be very far. Also, the hacker must initially access the car’s network through some sort of connection. This could be Wi-Fi or some sort of port in the dashboard. The only hackers capable of doing any real damage seem to need extensive knowledge of CAN protocol, which is the components cars use to communicate with one another. There aren’t too many people out there with this skill—at least for now.

One way a car can get hacked is if it has a fob system. In fact, access via unauthorized entry using a fob is the most common issue with hacking and will probably remain the biggest challenge car owners will face. However, an easy fix is to buy RFID key fob protector. They even make purses with fob protectors these days.

The devices insurance companies use to monitor driving habits also leave car owners prone to hacking. These devices connect via a port on the underside of the steering column. This also serves as an entry point for hackers. All an owner must do to keep it from turning into a weapon is to unplug it or remove it. Cars and trucks have many wireless entry points that can be hacked, but don’t drive yourself crazy trying to prevent every possibility. Our suggestion is to unplug or remove safety features only when you’re not driving the vehicle.

Yes, it’s a good idea to make your car as invulnerable to hacking as possible. However, it’s also important to remain level-headed about disabling safety features. The benefits of working safety systems in your car greatly outweigh the slight risk of being hacked. It is especially absurd to think it may happen while you’re driving. You’re still far safer with a car that has the most advanced safety systems than an older car that is safe from hacking.

You’ll also likely see a discount on your Car Insurance because of new safety devices that do prevent collisions. Remember, collisions are far more likely to occur than your car getting hacked. If you want insurance protection against car hacking and theft, you need Comprehensive coverage on your Auto Insurance policy. If you’re unsure about what your policy covers, speak with an AIS Insurance Specialist at (855) 919-4247.

The information in this article was obtained from various sources. This content is offered for educational purposes only and does not represent contractual agreements. It should not replace manuals or instructions provided by the manufacturer or the advice of a qualified professional. The definitions, terms and coverage in a given policy may be different than those suggested here. Such policy will be governed by the language contained therein.